I have been struggling with milking my first time freshener, Anaya. Anaya is the sweetest goat ever. She comes to greet us at the gate, follows me around the pasture for my daily walk and walks me back to the gate. Sometimes Chikelu joins in and if the grass is super long, I use their backs to steady my balance.

In the beginning we had trouble getting her onto the milking stand. It took both John and I to get her on. We had to put a rope on her collar, wrap it around a bar of the fence and use it like a wince. He pulled and I pushed her back end, lifting her foot till she got up on the stand. This happened for three or for days. Then low and behold, I could get her to hop up all by myself. Whew, I thought. We are past that hurdle. Wrong again- Read on.

The other problem we have had is that she gets her foot into the bucket if I don't move it fast enough. A lot of milk went to some very happy chickens, cats and dogs.

We tried a Webber hobble but she could shake the velcro fastener loose. We bought a horse hobble and ­that did stay on a little longer, but she could also shake that down to her ankles and then step out of it. The other day, I had to give 6 cups of milk to the pets because she managed, even though hobbled, to put her foot into the top of the stainless steel filter that tops my pail. The following day, I brought out two pails, thinking that since the milk under the filter wasn't touched, that I could continue the milking with a new pail (minus a filter)-wrong. She kicked a little debris into first pail and I no sooner started with the second pail and she put her foot into it. Today I decided to use both hobbles. The horse hobble on the upper leg and the webber at her ankles.

However,today, my problems began at the stand. Today she would have no part of the stand. I could not pull or push her up. I tried to coax her up by showing her the brush I use as a treat. She loves to have her head, neck and bum brushed with a stiff brush. Not interested. I put a little grain in her bucket but she tried to access it from the side of the stand.I was able to force her head into the head hold and closed it. I then walked around and tried to get her feet up on to the stand. When that failed, I put the rope back on collar and tried to pull her thinking she must be uncomfortable with her head in the head hold. Nope, she managed to get the head hold out of the top and bottom bolts and was standing their with her head roped to the fence. I had to call for John to come and put the stand back together and then together we got her back ontop of it.

She was cantankerous and kept trying to lift her leg. I managed to keep bucket out of her reach but she kept trying to get out of the hobbles and made milking her a real chore. I got some hay, thinking munching would relax her. It did for the few minutes it took to eat the hay.

I am one stubborn old lady and she may have met her match. I kept milking her. When the pail felt as though I had almost the 6 cups I was thinking of quitting. She saved me the trouble, She shook the horse hobble down to her ankles and loosed the Velcro on the goat hobble.

I decided enough for today, I unshackled the other legs, let her out of her head hold, removed her collar and gave her a very good brushing that she seemed to enjoy and then she hopped off the stand. Taking the pail into the house, I told my son, we have the worlds only un-milkable goat.

I think I am going to get a couple of bungee cords to anchor the hobble down to the floor of the stand.

If anyone has any suggestion, please let me know.

Well, we finally started work excavating around the barn. This meant moving all the items stored in the barn onto our back yard patio, including the milking stand. By this time, I was also started milking Chikelu since we had sold her kids and went from milking once a day to twice a day. However, they got very good at walking from pasture (being allowed to nibble lower branches of pine trees) to patio and jumping up on stand. Chikelu added a new trick-bucking.. I started attaching one of those straps that you can wince from the hobble to the floor of the milking stand.. Once she landed on ground almost toppling the milk stand on top of her so ended the wincing strap.

I left for a couple of weeks to dog/house sit for one of my daughters and John took over the milking. While gone I had time to rethink this. I decided that since they were generally well behaved in the beginning, one of the problems must be that I milked too slowly. They were always good till their grain ran out. I also thought that maybe I milked them too dry making them uncomfortable.

When I got back, I decided that I would end milking when they began to get fidgety. John said I was teaching them to misbehave. But, since this is a hobby and we were getting way more milk than we could use I decided to keep doing it this way. Milking now became less of a chore.

By the end of fall things had become a placid routine with the girls waiting for me by the pasture gate. They knew what order they were to be milked. I took them over to blackberry vines after milking each one, let then scrounge for a few weeds while I walked them back to pasture. This was now more like a hobby than a failing business.

We started making cheese. I used the recipe for feta that is posted on Fias.Co Farm. We now have a store of feta. I then tried the Mozzarella recipe. Twice I bombed at the last phase-the “stretching”.

After watching a couple of You Tube videos, we saw where I was going wrong. John made the next batch and we had perfect mozzarella that John put on his home made pizza dough, our own tomatoes and basil with organic pepperoni and baked in our EGG. YUM! I had expected 3 gals to yield 1 lb of cheese. I got almost 6 lbs. Tested the new digital scale and it is accurate. Wow! Great work girls! Pretty soon we will be set for any apocalypse.

I had decided to dry them up in October and breed only one of them in November for kidding in mid to late spring. However, the nature of the temporary housing of our bucks ruined those plans. Jashu escaped one day. Some time later, John said the goats were acting “pregnant”. I did a pregnancy test and wholla, both were pregnant. We are expecting late fall to early spring kiddings. That put an earlier end to the milking program, but not by much. Since the results came back “mid term” and “late term” we are not sure of kidding date yet again and are watching them closely.  Hopefully, the ladies will remember the routine and we won't have to retrace our journey.

We have not been able to get a trucking company to give us an estimate on hauling in rock for the excavation, but have been able to start moving some things from patio to barn once the cement dried.

Ornot was withered at 5 months. Vet said that banding was "ok" if he was going to be a meat goat, but that he should be surgically neutered if we were t o keep him- to aid against urinary stones. We had brought him in at 4 months for a selenium injection.  He was almost a hundred lbs. Mamma Anaya must have super rich milk.

(By the way, if we let him out he runs to mama and she will still let him nurse. We don't let him out with her any more 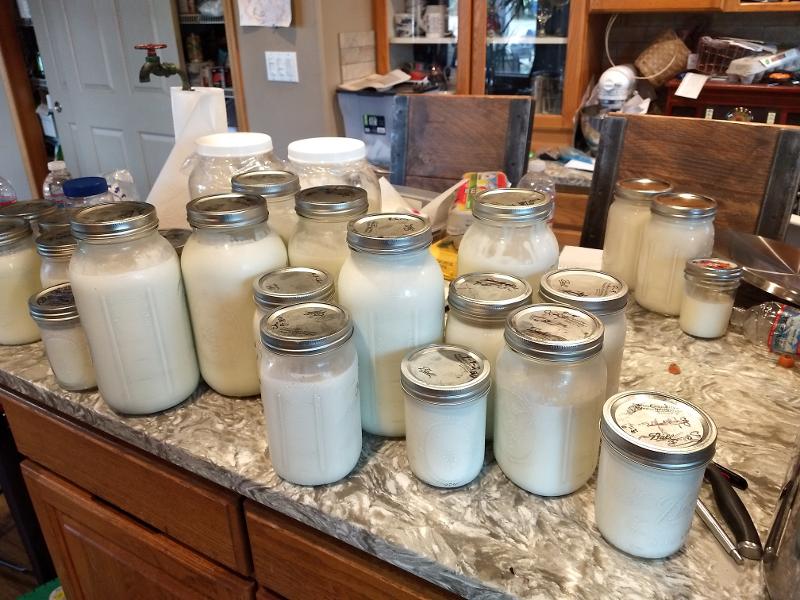 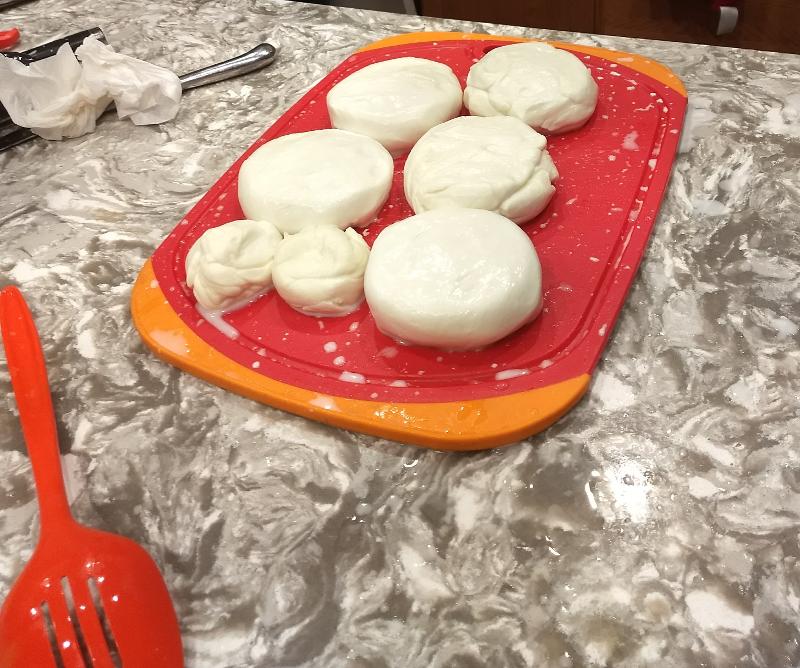